UISG have always interesting topics to share with us and as this February 8th marks the International Day of Prayer and Awareness Against Human Trafficking they remind us that Pope Francis has repeatedly put the spotlight on the scourge of human trafficking and appealed for concrete action to root out its causes and protect the millions of victims of this modern slave trade.

He met members of Talitha Kum network and the Galileo Foundation to launch the SUPER NUNS community that aims to raise funds for the sisters engaged in rescuing victims of trafficking and help them restore their lives.

Talitha Kum has for 10 years operated the global network of Catholic sisters who are quietly dedicated to prevention, rescue and rehabilitation of human trafficking survivors.

The work the sisters do is challenging and often risky. They are out on the streets raising awareness, making contact with victims in dangerous contexts, sheltering them from traffickers and exploitation, providing a passage home and new skills with which to rebuild shattered lives.

The Super Nuns community is a project launched by Talitha Kum (an initiative of the International Union of Superiors General), that aims to reach a whole new range of potential supporters.

As Sister Patricia Murray, Secretary of the UISG told Vatican Radio, thanks to a partnership between the Galileo Foundation, some popular street artists and an international communications platform, the work of the “super nuns” will be illustrated for all to see, as will the great spirit of the survivors.

SUPER NUNS, Sister Pat explained, is an exciting new initiative geared to help the Talitha Kum sisters who are dedicated to rescuing those who have been trapped and trafficked to different parts of the world.

“We are calling them SUPER NUNS because what they do is extraordinary work:  very hidden work,  quite dangerous work at times, where they rescue victims, women, men and children, and then shelter them and then there’s a process of rehabilitation and integration back into society,” she said.

She went on to say that the use of popular media is a “whole new way of reaching out to people who wouldn’t have ever met a sister, wouldn’t know their work,” except for perhaps associating them with the areas we traditionally associate with them like schools, hospitals, clinics.

“But there are thousands of sisters working in the whole area of trafficking and engaged in anti-trafficking campaigns and also rescuing and rehabilitation, and I think art is a creative way” to raise awareness she said.

The image of the SUPER NUN, Sr Pat explained, resonates with the message conveyed by Superman and Superwoman: “it’s super in the sense of being daring.”

That’s why, she explained, it can’t be just the work of individuals or of a network of sisters: it calls for global action to support this initiative in whatever way we can. 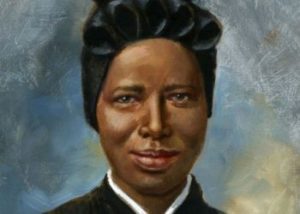 “So this is a multi-faceted and quite a complex rescue and restorative operation,” she said, and a direct response to Pope Francis’ call for a culture of care.

She expressed her gratitude and admiration for the artists who have entered into this campaign with the nuns “so we can let a whole new audience of people know that this work is happening within the Catholic Church and that they can be part of it.”

Sr. Pat concluded inviting all men and women of good will, Catholics throughout the world, to support this initiative in the certainty that every penny they donate will go to the work on the ground. For donations and more information there is a link on the Talitha Kum website.

If you would like to know more about the Columban Sisters:
E-mail us : weboffice@columbansisters.org

You can find out more about which cookies we are using or switch them off in settings.

This website uses cookies so that we can provide you with the best user experience possible. Cookie information is stored in your browser and performs functions such as recognising you when you return to our website and helping our team to understand which sections of the website you find most interesting and useful.

Strictly Necessary Cookie should be enabled at all times so that we can save your preferences for cookie settings.

If you disable this cookie, we will not be able to save your preferences. This means that every time you visit this website you will need to enable or disable cookies again.

This website uses Google Analytics to analyse how visitors use our website.  These cookies give us information about visitor numbers, website traffic, pages of interest etc. This is so that we can improve our website design and functionality, to develop our website based on users’ interests, and to ensure our website displays correctly.  The information collected by Google Analytics includes:  IP address from which you access our website, the type of browser you used to visit the website, the operating system used, the top-level domain name used (eg. .ie, .co.uk, etc), the date and time of the visit, pages visited  etc.  This information is transferred outside the EEA based on the EU-US Privacy Shield.  You can find out more information at: www.https://support.google.com/analytics.answer/6004245 The name of the cookies, their function, and their retention periods are set out below:

Used to throttle request rate
_ _utma 12 months from last visit       Used to distinguish visitors and pages visited. Records a unique ID, the date and time of first visit, time of current visit and total number of visits made
_ _utmb 30 minutes from last visit      Used to determine new sessions or visits. Stores the number of page views in current visit and start time of visit
_ _ utmc        Session cookie  Used to note that the visit has ended when browser is closed
_ _utmz 6 months        Records the site you may have linked to our page from. Only records data if you clicked on a link to our site from a different website

Please enable Strictly Necessary Cookies first so that we can save your preferences!